My job is insane, and it’s also filled with bureaucratic cost-cutters who like to ensure that their clients get as little quality out of their purchase as humanly possible. And that includes stock images that would make infant Jesus cry blood.

For example, when asked to re-edit a site I noticed that it included this image (for a website about air filtration systems): 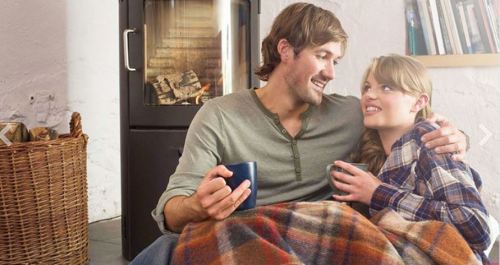 What the fuck are these people? They don’t even look like real people. They look like something out of AI but maybe a low-budget first attempt at it where the sex robots cuddle with one another in order to briefly escape their metal-indentured-servitude while wearing shitty clothes on a floor in an adobe. What’s going on with that cabinet behind them? Is it blocking an exit? Is it filled with logs? This all looks like the cover of the Sweet Valley High where Elizabeth gets kidnapped from her job as a candy stripper at the hospital by that unstable guy who feeds her pancakes. Liz? Is that you up there?

Dude, the itchy blanket isn’t even covering his lap entirely. I see his jeans. And, like, he looks vaguely threatening, right? He looks like he’s pulling her closely to him in order to whisper to her his sweet-nothing fantasies about jerking off to Mel Gibson’s Apocalypto

Okay, I can’t do better than a tug off to Apocalypto so enjoy the above.