My friend Shawn (he did a guest post on robots) has the coolest dog in the world. He’s a miniature Pinscher named Vader. I absolutely love this little dog: 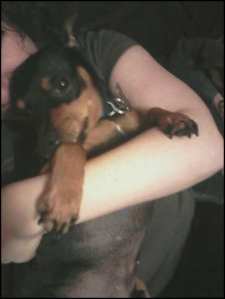 He is a lady killer and a total pimp. His yips are as iconic in our group of friends as Andy Warhol’s soup can.  He charms even the hardest of hearts; he’ll eat the largest of Baconators®.

He seduces the most curmudgeonly of souls

So, as a birthday gift for Shawn I decided to draw the portrait in Titanic the way it was meant to be drawn. While many might view the supple naked body of a young Kate Winslet to be beyond improvements…I saw an area in which it was lacking. It was completely absent of Vader.

I rectified that problem:

Draw me like one of your French Vaders. Wearing this. Wearing ONLY this.