Whenever life gets particularly shitty I like to search through the comments on YouTube to see those that are significantly worse off than me.  There is nothing more heartrending than the cries of the forlorn seeking internet therapy while simultaneously watching music videos.

The song? The music that was breaking their heart and reminding them of this tragic loss?

Ya know, the song from Pretty Woman

And in case you don’t understand the absolute hilarity in weeping over this entirely shameful song, here is the music video

Good luck, sir, hopefully the dulcet tones of Go West will help ease the heartache. And if it brings you any comfort, your comment made me laugh my ass off during a time of my own misery.

There are many incredible things that I was tardy to the party for: The Wire, the awesomeness of video games, orgasms. Despite the depression that comes with finding amazing things late in the game, I would be a less of a person had I never discovered them. This brings me to the most important discovery of my adult life.

During the entirety of my youth I was completely unaware of a certain phenomenon sweeping the land. It was called “the boy band.” I, too, had a boy band phase as a child. For this band:

I was under the impression that the Monkees were a contemporary band (during the 90s) and therefore lauded my admiration for them, endlessly watching taped re-runs of the show on our Beta Max. If you were still wondering, yes I did live a very sheltered life.

However, most well adjusted tweens during this time were sacrificing to the alter of a much more popular god:

Those hats, that hair!

I was completely unaware of this group, or any of their songs, until my boyfriend introduced me to this song at the age of twenty-six:

(spoiler alert: Donnie Walhberg eats a baseball at the end of the video!).

This started my obsession, sixteen years late, with New Kids on the Block. I am so bummed that I missed out on the cultural phenomenon that was NKOTB. They are like a bizarre sociology experiment (I love you, Jordan!) that at one point covered the Delfonics. 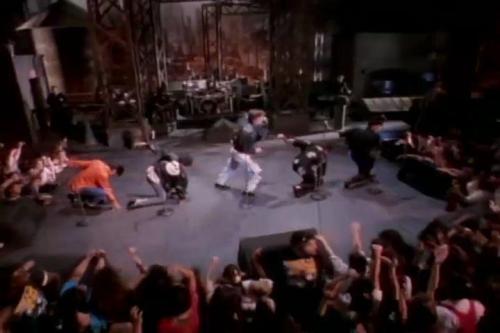 My greatest obsession is with how they dress, and like any teenage devotee I decided to try and emulate their style.

or drink late in the night, wearing over-sized overalls and trying to do the dance moves from Step by Step

Step 1 (we can have lots of fun) Take your jeans and attempt acid washing (tub, chlorine, and rubbing). Mine only dyed to a lighter blue

Step 2 (There’s so much we can do!) attempt fraying process. I started off with scissors.

Step 3 (It’s just you and me!): Scissors didn’t work. I then used a cheese grater.

Step 4 (I can give you more!): Cheese grater was not working. I used an exacto knife, which gave me the best results, also time consuming.

Step 5  (don’t you know that the time has arrived!). I gave up and then just cut holes into the jeans and pulled on the strings.

You too can look like a New Kid. Hang tough, ya’ll.

PS: all pictures (with the exception of the ones of me) are the property of the owner. No theft intended. Peace!